Added by Krystinalynn Maria about 4 years ago. Updated over 3 years ago.

These features, while aesthetic, are powerful to assist the user in finding a member of a channel at a glance, and further find their previous messages in a busy channel.

My proposal is to allow the use of nicklist icons in a channel. They can be prepended to matching nicks in the channel, thus making it even easier to identify select members of the channel by the client user. I'd imagine this functionality wouldn't be too hard to add in, as parts of it already exists in the function I described at the beginning of this post.

In a basic implementation, the existing icons used for nicklist icons would be prepended to matching nicks in a channel, when a message is sent by that nick. In a more advanced form, additional icons could be added for other IRC events, such as echoes, notices, joins, parts, quits, etc.

If you opt to implement this function in a basic way, I'd suggest adding a simple checkbox under Options > Icons to "Use nicklist icons in channels". If you opt to implement this in a more advanced way, you might want to add additional options to the dropdown box in the Icons group box under Options > Icons. These additional options would include "Client Messages", "Connect", "Disconnect", "Echoes", "Joins", "Mode Changes", "Notices", "Parts", "Quits", and "Topic Changes".

Each of the aforementioned options would allow users to set an icon for each event that would appear in a channel, privmsg, or status window.

Updated by Per Amundsen about 4 years ago

Yeah I have something like this on TODO already, adding a dropdown to Nicklist icons similar to Nick Colors, "Message and Nicklist", "Messages", "Nicklist", the icon would then be added in front of the nick prefix generated by "$pnick" in Options -> Messages -> User Prefix, and also a new variable to insert the icon in a custom place, e.g "$icon".

Experimental support was added in the latest 3.2 beta, it only covers regular messages for now, I have some ideas for other message types in the future.

A new prefix variable $nickicon can be used to position the icon in a custom place.

Updated by Krystinalynn Maria over 3 years ago

Fantastic job! I just started using the function in 3.2 and it works flawlessly. It did make me wonder though.
1.) Would there be any way to add/modify/remove icons via a scripting identifier?
2.) Would it be possible to have multiple images assigned to a single nick?

I'll think about adding a /nickicon command, similar to /cnick. Technically, it's possible to use /setoption or /remini, /writeini to modify the [NickListIcons] section in the config.ini file.

It's not possible to have multiple icons, it scans the list for the first match based on all the rules.

Just curious why would multiple icons be desirable?

Updated by Krystinalynn Maria over 3 years ago

Multiple icons would just be another customization option for the client. Short of that, there would be no real reason to have multiple icons.
I asked merely out of curiosity from seeing it in the past with a twitch theme for AdiIRC: 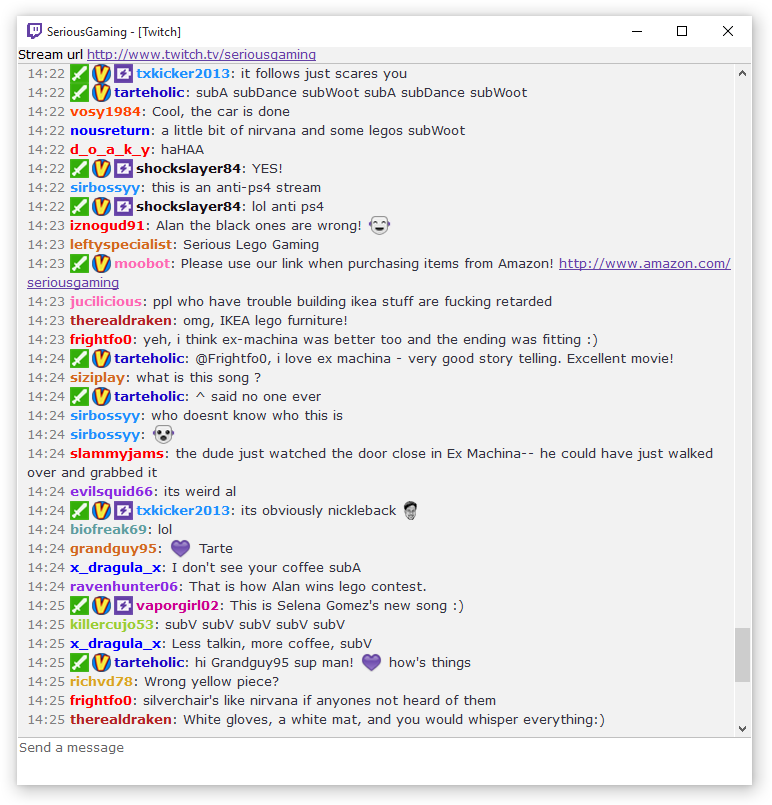 However, as far as I know, this theme isn't publicly available. As for the /nickicon command, that would be preferable. Using the technical options is something I've done, albeit rather cautiously at first, to avoid corrupting the config.

I see, I think that is a script that maps something from the Twitch IRDv3 message tags into emoticon triggers, then uses /echo to print a custom line with emoticons, that is possible now as well.

Must be getting old, completely forgot there already is a command for it /Inick, will add a method parameter for next beta.