Add an delay on ServerList network connection due startup

I wanan request an small addition related on ServerList feature, it would be nice to see a delay between each loop network connection that exists on the list because it will help when there are more than 1 networks saved.

Example: If someone has 5+ networks and every network has the option "Connect to this network on startup" and starts up the AdiIRC then AdiIRC will open 5 new connections directly (normally) but in old machines there is a lag-stuck-delay (5-10 secs) there, so it would be nice to having an option under 'Misc' tab on the ServerList to determind in how many seconds after the AdiIRC will open the new connection window (e.g: /server -n) to connect to that network. 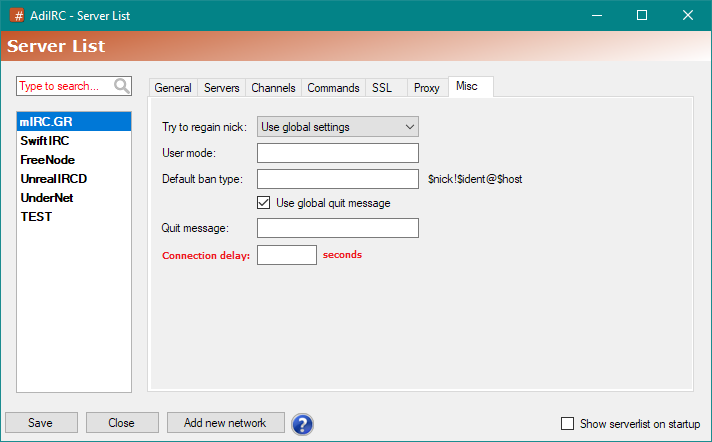 I don't think this will accomplish what you think it will.

Instead try enable "Minimize server window" and set each channel join to minimize as well.

I already using both options :p

Can you explain a little more the problem, e.g if all windows are minimized they wont take the focus from the Editbox, so what is the problem?

Have you tried connecting using a stock AdiIRC with no scripts?

Have you tried using a on CONNECT script with /server <network name in the network list> and /timer to connect ?

The problem is that it should be an delay between each new server window created on startup, because now i have 6 and each of one except the first one are minimizing on startup and connecting to the associate network/server. AdiIRC should has by default an delay there.

Starting up..
Opening 6 new server windows (directly) and connecting to their associated network/server.

This could be script of course, but it would be nice to see there an option per network or global option to set an X delay to connect into the next server from Server List, that option that i request helping solving an stuck if you force adiirc to connect on startup on 6+ networks from Server List and joining into channels (especially for old machines).

You still haven't really explained the problem with opening server windows in a minimised state, it should be near instant and not a problem.

I'd rather figure out what the problem is instead of randomly adding options which so far only you seem to need.

I am not actually telling that AdiIRC having a problem, on newer machines it working instantly but on old machines there is a stuck when massive connecting on startup on 6+ networks/servers, and i am suggesting to add an simple "*Delay between connections*" (look the example photo above) same as you have for Channels on Server List under Misc to determine in how many seconds i want to connect into that network in order to not force AdiIRC on startup to connect on 6+ network/servers instantly.

Do you have a old machine with this "stuck" problem or not? It's getting confusing.

Yes i have that's why i suggest an option to add a delay there.

Okay great, then we should figure out why you have a problem and fix it instead of making options to mask the problem.

You mentioned already you have minimized server windows enabled, then there are 2 other things to test.

Have you tried connecting using a stock AdiIRC with no scripts to see if you still have the "stuck" problem?

Have you tried using a on CONNECT script with /server <network name in the network list> and /timer to connect to see if you still have the "stuck" problem?

Based on these answers I can look into adding debug information etc.

A better description of what "stuck" means would also be nice.

I made a code via ON START and added /timer to connect into every network related to Server List and it seems ok, i didn't tested on clean AdiIRC to see if it is occuring but so far as i used mSL as alternative it is ok and no need anything else.